TONE Scaffolding were called in on a semi-emergency job at Chalkwell Station when a pedestrian bridge had to be shut down. In order to give the public access to the bridge again, TONE had to construct a temporary bridge within the original bridge. Was the initial scaffold was completed it was clad to make it more visually appealing for users. 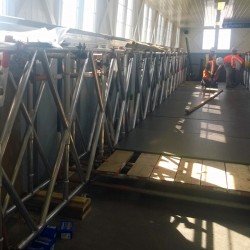